A Brief History of the Pokagon Band

The Pokagon Fund and The Pokagon Band of Potawatomi Indians are two separate and distinct entities. The Pokagon Fund is a private foundation established under the laws of the State of Michigan and governed by its own board of directors. The Pokagon Band of Potawatomi Indians is a federally recognized tribe, and its approximately 5,200 members possess certain sovereign powers of self-government. This brief history of the Pokagon Band is posted to pay homage to the tragedies and triumphs of the Tribe’s past and to celebrate the richness of its culture, altruism of its values, and perseverance of its people.

The Pokagon Band of Potawatomi is a federally recognized tribe with approximately 5,000 members. It is based in Southwest Michigan and Northern Indiana with its governmental operations located in Dowagiac, Michigan.

As a federally recognized tribe, the Pokagon Band has the sovereign right to govern itself and to take land into trust as traditional homelands and reservation sites. In January of 1999, the tribe entered into a Memorandum of Understanding with the U.S. Department of Interior that allowed it to take up to 4,700 acres of land into trust. Using that power, the tribe took 675 acres of land into trust in New Buffalo Township, Michigan and thereafter took additional lands into trust in Hartford, Michigan and Dowagiac, Michigan. On November 18, 2016 the Bureau of Indian Affairs approved the tribe’s application to take into trust 166 acres of the Pokagon Band’s ancestral homeland in the city of South Bend. This is the first sovereign tribal land to be taken into trust in the state of Indiana.

In fulfillment of its vision to “strive for successful economic strength thus assuring the sovereignty of the Pokagon Potawatomi”, the tribe opened the Four Winds New Buffalo casino (which is the source of funding for The Pokagon Fund) in 2007 on the New Buffalo Township land it took into trust. Two satellite casinos followed in Michigan, the Four Winds Hartford (2011), and the Four Winds Dowagiac (2013). The tribe has also proceeded with plans to construct a $480 million casino project on lands near South Bend, Indiana. The South Bend project anticipates the building of a 164-acre “tribal village” that will include housing, healthcare, and government facilities for tribal members.

The successes of today’s Pokagon Band members are in stark contrast to the future intended for them by the federal government in the early 19th century. In 1830, the U.S. Congress passed the Indian Removal Act and directed that all American Indians be relocated to lands west of the Mississippi River, leaving the Great Lakes region open to further non-Indian development. For the Potawatomi this was a devastating development.

Together with the Ojibway and the Odawa Nations, the Potawatomi had migrated over 500 years ago from the Atlantic seaboard to the Great Lakes region in what is now Wisconsin, southern Michigan, northern Indiana, and northern Illinois. These three tribes had loosely organized as the Three Fires Confederacy with each having an important role in maintaining their traditions. The Ojibway were said to be the Keepers of Tradition. The Odawa were known as the Keepers of the Trade. The Potawatomi were known as the Keepers of the Fire. Potawatomi means “The People of the Place of the Fire”.

The Potawatomi as well as the Ojibway and Odawa Nations called themselves Neshnabek, meaning the original or true people and they controlled millions of acres of land. The Neshnabek were uniquely able to take advantage of their new homeland.  They lived in a mild climate that allowed for extensive farming.  The tribe had access to birch trees and the knowledge of how to build canoes from birch bark. This combination of farming and transportation technology gave them the ability to travel and trade long distances in their birch bark canoes and accounted for the vitality and wellbeing of their communities. Those happy times ended with the steady migration of the European settlers, the 1830 Indian Removal Act, and the 1833 Treaty of Chicago.

In 1833, the United States government called together all of the Potawatomi tribes of the area to a final treaty negotiation at Chicago to establish the terms of removal under the Indian Removal Act. Potawatomi community leaders from villages throughout the Midwest attended that fateful meeting. One of those leaders was Leopold Pokagon, the chief of the Potawatomi of the Saint Joseph River Valley.

Three years before the treaty negotiation in Chicago, Leopold Pokagon had concluded that an affiliation with the Catholic Church could provide protection against removal. He visited in Detroit with Father Gabriel Richard and obtained the services of Father Stephen Badin who established a mission and converted the Pokagon Potawatomi to Catholicism. That conversion proved fateful. 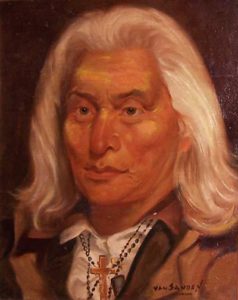 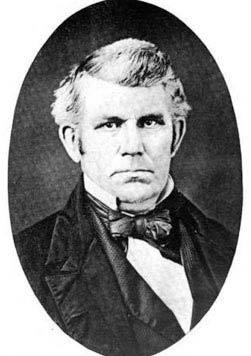 Although almost all of the Potawatomi were ultimately forced to migrate West, Leopold Pokagon used his strong ties and those of his Band with the Catholic Church to negotiate an amendment to the Treaty of Chicago that allowed Potawatomi of the Saint Joseph River Valley (later to be known as the Pokagon Band) to remain in Michigan. The price was steep. The last of the Pokagon land holdings, 5.5 million acres, were ceded for $2,000. Chief Leopold used that money to buy back approximately 840 acres in and around the Silver Creek Township, near Dowagiac, Michigan. From that base the modern Pokagon Band grew to its present prosperity, but not without the persistent threat of removal, despite the protection given by the Treaty of Chicago. In 1840 the federal government renewed its efforts to enforce the Treaty of Chicago and remove the Potawatomi from Michigan and Indiana. General Hugh Brady was sent to Detroit to oversee the removal efforts and was intent on also removing the Pokagon Band. The General’s agents rounded up approximately 500 Potawatomi to be shipped west, but the Pokagon Band stood their ground at Silver Creek.  Chief Leopold Pokagon obtained from Judge Epaphroditus Ranson, then an associate judge of the Michigan State Supreme Court and later Governor of Michigan, an opinion stating that, as Christian land-owning farmers, the Catholic Potawatomi were protected from forcible relocation by rights found in Michigan law. When General Brady received word of Judge Ranson’s legal opinion he immediately wrote a “pass,” exempting the Catholic Potawatomi from relocation. Brady’s pass represented the final triumph of Leopold Pokagon’s long effort to avoid relocation. The resilience demonstrated by the Pokagon Band of Potawatomi in its struggle to maintain a tribal homeland on land that the Neshnabek, had inhabited for centuries is an enduring and endearing tale. A milestone in that tale came on September 21, 1994 when the status of the Pokagon Band of Potawatomi as a Native American Indian nation was reaffirmed by an act of Congress.  That date is celebrated by the Pokagon Band as Sovereignty Day. Commencing with the 1999 Memorandum of Understanding with the U.S. Department of the Interior, the Pokagon Band’s progress toward financial security culminated in 2007 with the opening of the Four Winds Casino New Buffalo.

The name itself, “Four Winds”, is symbolic of the Four Directions of East, South, North and West which the traditions of the Potawatomi honor during prayer, during ceremony and throughout the day. Each direction has unique significance. East is the direction from which light comes, and therefore the direction of illumination. It is the direction for birth and rebirth. Rebirth can mean learning new things or gaining a new level of understanding. It is the direction of guidance and leadership. The gifts of the east include clear speech that help others understand, light, purity, truthfulness, childhood, innocence and uncritical acceptance of others. South is the direction of the sun at its highest point. It is the place of summer, of fullness of youth, physical strength and vigor. Symbolically, it is a time of preparing for the future, of getting ready for the days ahead. The South is also a place of the heart, of generosity, of sensitivity to the feelings of others, of loyalty and love. The most difficult and valuable gift to be sought in the South is the capacity to express feelings openly and freely in a way that does not hurt others. West teaches that its greatest lesson to be learned is to accept ourselves as we really are, as both spiritual and physical beings, and to never cut ourselves off from the spiritual part of nature. Gifts of the West include darkness, contemplation, deep inner thoughts and the unknown. North is the place of winter and the white snow that reminds us of the white hair of our Elders. It is the place of true wisdom and survival. Survival sometimes means physical survival, that there is enough food and wood to keep us warm. It can also mean emotional and mental survival against loneliness and depression, keeping our spirit and heart strong. Gifts of the North include our Elders, insight, wisdom, moderation and justice. Today, with its status as a sovereign Native American Indian nation recognized by the federal government, the Pokagon Band has been enabled to provide services to Band members that enrich their lives–language and tradition’s classes, elder’s services and luncheons, housing, healthcare, commodity distribution, employment training and placement, college scholarships, and youth summer camps. 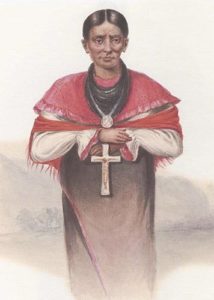 Integral to the Tribe’s ongoing commitment to its citizens and the region to advance economic self-sufficiency through business development, job creation and diversification of the tribal economy is Mno-Bmadsen, the non-gaming investment enterprise arm of the Pokagon Band that was formed in 2012.  With over 280 employees in over three states, the Mno-Bmadsen Family of Companies provides architecture, engineering, land-use planning, environmental mitigation and restoration services, construction, mechanical contracting and plastic molding to the commercial, government, and tribal markets. Mno-Bmadsen is the next step in sustaining the Pokagon Band through mergers, acquisitions and investments that will allow it to continue to thrive in the centuries to come.

Moreover, on the cultural level, the modern Pokagon Band continues its role as Keepers of the Fire by maintaining the traditions, religions, customs, language and cultural history of the Neshnabek through storytelling, art, crafts, music, museums and pow-wows.

After centuries of turmoil and heartbreak, The Pokagon Fund represents a lasting bond between the Neshnabek, the original and true people, and those who came after.

The Pokagon Band of Potawatomi-Tribal History